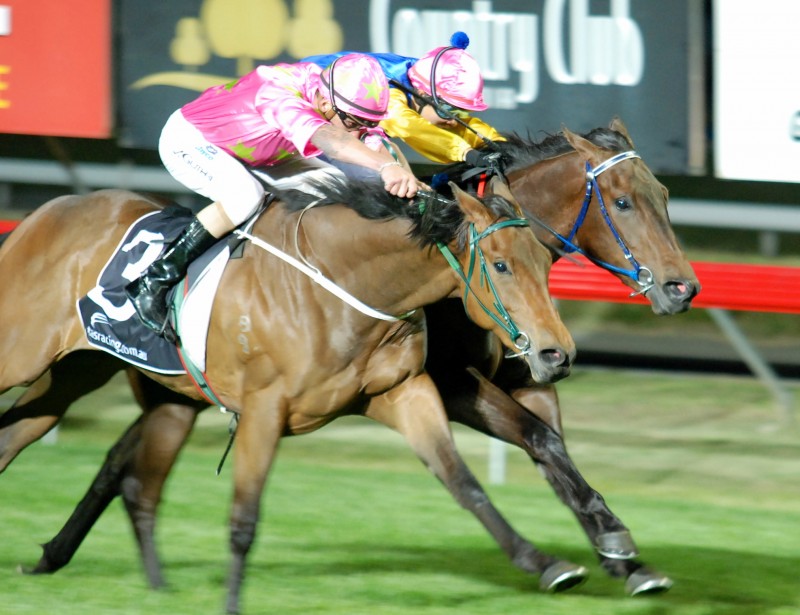 The Tasmanian Magic Millions yearling sale provided its second Melbourne city winner in a week when Kenjorwood took out the Betty Moran & Gregory Nugent Handicap (2000m) at Flemington on Saturday.

This follows the win by popular gelding The Cleaner (2009 sale) at Moonee Valley in the Jeep Don’t Hold Back Handicap (1600m) the Saturday prior.

Kenjorwood is a graduate of the 2011 Tasmanian Yearling sale from the draft of Grenville Stud. Kenjorwood is by Snippetson from the Flying Spur mare Flying Diva and was knocked down to Leigh Winwood for $41,000. The 5yo bay has had 20 starts for 3 wins and 8 minor placings for prizemoney of $187,000.

The gelding commenced his career in Tasmania under the training of part-owner Darren Kenny where as 2YO was placed in both the Listed Gold Sovereign stakes and Tasmanian Magic Millions 2YO classic. He showed enough for connections to have a crack at the Group 2 VRC sires produce where he was wasn’t disgraced beaten 8 lengths by All Too Hard. As a 3YO he was placed in both the Tasmanian and Hobart Guineas before being transferred to leading Melbourne trainer Peter Moody.

Flying Diva has produced 5 foals for 3 winners, Uboa (8 wins) Kenjorwood (3 wins) and Frolicked 2 wins including the 2013 Magic Millions 2YO Tasmanian Classic. Flying Diva was served again by Snippetson in 2014.

The 2015 Tasmanian Magic Millions sale will be conducted in Launceston on Thursday 12 February.