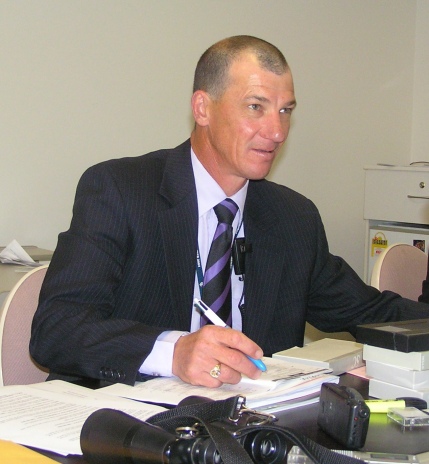 TASMANIA’S chairman of harness stewards Shane Larkins has resigned to take up a position as chief steward with Harness Racing Victoria.

Larkins has been chief harness steward for almost four years. He began his stewarding career in thoroughbreds but switched to harness and that led to him accepting a senior steward role with Harness Racing New Zealand in 2006.

He returned to Tasmania and was subsequently reinstated with Racing Services Tasmania in 2007.

Tasmania’s Director of Racing and head of racing integrity Tony Murray said Larkins was very worthy of the position he has accepted.

“It is a great achievement and an excellent opportunity for him and I am sure the industry will join me in wishing him all the very best in his future role,” Mr Murray said.

“Shane has earned the respect of the local industry as a person with impeccable integrity who is willing to work collaboratively to achieve common goals,” he said.

Larkins said he was excited by the appointment but also disappointed to be leaving.

“It will be a great challenge to take on the role in Victoria, but I do have some regrets to be leaving Tasmania from both a professional and personal viewpoint,” Larkins said.

“I have thoroughly enjoyed working at Racing Services Tasmania and with local industry participants.”

“I have particularly enjoyed working on the Harness Advisory Group that has helped foster rapport with the industry as well as achieving high level outcomes,” he said.

Larkins began his career in probity as a cadet and eventually settled in the thoroughbred code.

He left the state five years ago to stewarding career in thoroughbreds and left the state to take on a role as a senior harness steward in New Zealand but his tenure there was short-lived as a result of his family being unable to settle into the lifestyle in that region.

Larkins will remain in his current role in Tasmania until 5 August 2011.