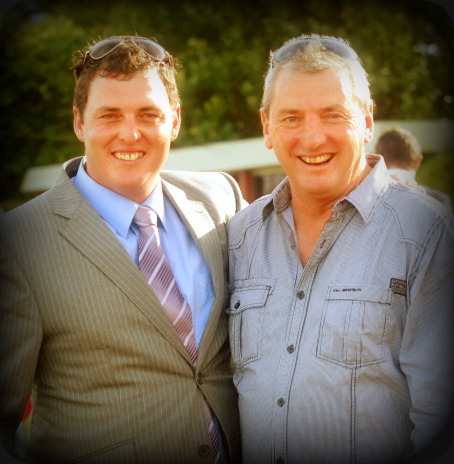 THE father and son training partnership of David and Scott Brunton celebrated another great season by winning the 2011-12 trainers’ premiership by a healthy margin.

Team Brunton finished with 70-1/2 winners to be a clear winner from their nearest rival Leon Wells who enjoyed one of his best season’s with 38 wins that included capturing the Group 3 Bow Mistress Stakes with his star mare Rebel Bride.

David Brunton is very pleased with the outcome.

“This has been a very good season for us for a lot of reasons,” David Brunton said.

“Good things have happened for us during the season and there have been a lot of highlights including our three-year-old Buzzing Along that won the 3YO Cup in a head-bobber and then ran second to Lady Lynette in the Vamos Stakes – that was a bit special,” he said.

According to David the stable went through a cleaning out process as the season progressed.

“We’ve had a bit of a clean-out year where horses have got to their marks and had to be moved on and we also have unearthed a couple of very promising young horses that showed up and were tipped out with the hope of doing well this coming season,” he said.

STEPHEN MASKIELL has long been one of Tasmania’s best and most consistent jockeys and his toil last season was rewarded by winning his eighth premiership.

Maskiell ended the season with 64-1/2 winners to finishing only a half-a-win clear of his arch-rival Brendon McCoull who had his hopes of winning a 13th title dashed by an injury that sidelined him for the last four meetings of the season.

There were feature race highlights for Maskiell that included winning the Brighton Cup aboard the highly promising stayer The Cleaner and he produced as gun rides to get Buzzing Along home in the very last stride to win the 3YO Cup over Anelene in one of the tightest photo-finishes of the season.

Maskiell spread his wins around the state with the majority emerging in Hobart where he rode 23 winners (including a dead-heat) but only marginally over Launceston (22) and Devonport (20).

He is the consummate professional who is an avid track walker and there is no rider who studies the form better than Maskiell.

RASIT YETIMOVA is one of two apprentices who arrived in Tasmania from Turkey last year to make an impact on Tasmanian racing.

Yetimova and Bulent Muchu have developed into top young riders during their time in the state as indentured apprentices to Tasmanian Hall Of Fame trainer Walter McShane.

But it was Yetimova who tackled the challenge head-on and emerged as one if the top five riders in the state with a season tally of 35 winners to clearly win the top apprentice’s title from his fellow countryman Muchu who ended the season with a double at the last meeting to take his tally to 20-1/2 wins.

Yetimova had success for many trainers but his multiple wins aboard Gee Gees La Quita and Jay Bee’s Gee Gee for Brighton trainer Stuart Gandy were probably more special as the trainer and rider have become mates.

Yetimova had more success in Launceston where he rode 15 winners compared to 10 in Hobart and Devonport.

The horse on which he enjoyed most success was the Stephen Lockhart-trained mare Vivre La Nett on which he had three wins.

Yetimova spent the last part of the season on loan to Spreyton trainer Leon Wells and while there he rode four winners for his temporary mentor.