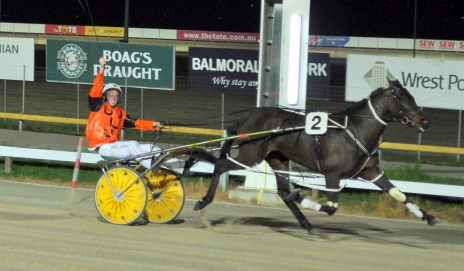 TASMANIA’S harness industry driving ranks have been bolstered in recent times by the arrival of some very promising young drivers.

This was evidenced at Tattersall’s Park at Elwick last Sunday night where two teenagers drove their first winner in successive races.

Beau Luttrell, 16, partnered Gun Filly to a comfortable win in a C0-C1 race over 2090 metres and in the following race 19-year-old Lyarna Graham delivered the goods aboard The Jouster in a C3-C4 over the same journey.

Luttrell has been working with horses for the past seven years and has taken to driving like a duck to water, while Graham has had an interest in the code since she was a toddler attending harness meetings at the Royal Showground with her grandfather Peter Johnson who at one stage had a number of horses in the Ken Austin stable.

Graham, who works as a bar manager at the Pembroke Hotel at Sorell, had her interest in harness racing rekindled two years ago when she became involved in a relationship with top young reinsman-trainer Mark Yole.

“I began getting interested in driving about two years ago through my relationship with Mark (Yole) and to get my first winner at only my fourth dive is quite amazing,” Graham said.

“I have a pacer that I sent to Heath Szczypka to train and he said later on that he was prepared to use me as the stable junior driver,” Graham said.

“That’s how I got the chance to drive The Jouster and getting my first winner is every bit as special as I was told it would be and that it was on one of Heath’s horses capped it off.”

“After this win I’m pretty sure it is a career I want to take outside of my full-time job,” she said.

Graham’s drive was superb and one of which any seasoned professional would have been proud.

She had The Jouster settled on the back of the leader and favourite Ark West but she managed to keep the horse settled into a smooth rhythm despite a muddling pace and she eased off the fence just at the right time turning for home.

Her charge remained perfectly balanced throughout the maneuver and when she called on the gelding for the supreme effort he quickly put the end result beyond doubt.

It was a similar scenario for Luttrell who made a split second decision early in the race that proved a winning move at what was only his fifth drive.

His charge Gun Filly was only moderately away from the pole position (gate one) and was left three-back on the fence but when the pace slackened he eased her off the fence and sent her forward to race outside of the leader but did it without overtaxing the filly.

He called on her to extend turning for home and she set up a winning break at the top of the home straight.

Gun Filly is trained by Luttrell’s step-father Greg Scott who is a talented trainer with four horses in work.

“Greg (Scott) has been really great to me and about four years ago he asked if I wanted to have a go at driving and I’ve been doing it ever since,” Luttrell said.

“I was driving them in trackwork and I decided about two years ago that I wanted to have a real go at making a career from harness racing.”

“I love it and getting my first winner so quickly is amazing,” he said.

Luttrell and Graham are two of a group of talented young reinspeople to make their way into the sport in the past 18 months.

Another talented teenage driver Alex Ashwood, 17, this year became the youngest to outdrive his novice claim and he is about to embark on a stint interstate with a top stable that he hopes will lead to a full-time career in that state.

Another talented youngster coming through the ranks is Nicholas Brockman and Alison Blackwell had her first drive in Hobart last Sunday night and showed enough aboard Ashinaga to suggest she may have a future in the sulky.