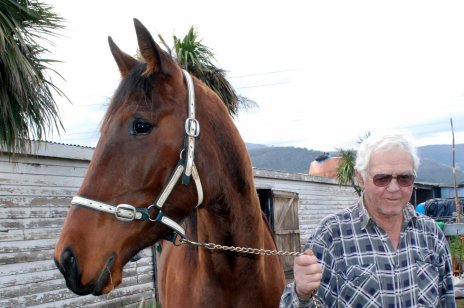 TASMANIAN harness racing lost one of its stalwarts this week with the passing of former trainer-driver Fred Medhurst who died aged 82 as a result of illness.

Medhurst lived for harness racing and there were few more passionate about the industry.

The passion he had for harness racing burnt so deep that it won out over many adversities until chronic glaucoma forced Fred to finally stop doing what he loved most – driving pacers.

On his 80th birthday his children asked him what he wanted and he gave them a customary cheeky grin and asked to drive a horse around the track on the family property at Magra, about 40 kilometres north-west of Hobart.

With only family members present and under the very watchful eye of his sons Zane and Paul, Fred slid into the jog cart and set about steering a well-educated horse around the 500-metre training track.

A few days passed before the smile dissipated.

As the son of a harness horse owner-trainer, Medhurst’s foray into harness racing began at an early age with a horse he bought in 1946 named Diamond Derby.

He bought Diamond Derby for 100 pounds off a Mrs Lynch who had a lot of horses that were trained by the late Tommy Terry who was a top trainer in his day.

In those days 100 pounds would have laid a decent deposit on a house.

Until recently Medhurst had never been without a horse he either trained or raced and told this writer not too long ago that his life would not be complete without a horse to own or train.

Medhurst was considered a master horseman at the tender age of 17, he developed his own riding style and when sulkies took over he quickly mastered the art of driving.

His first winner arrived in the form of Brown Penny at the Royal Showground in 1954.

Medhurst drove competitively until 1983 when an arm injury ended his career in the cart.

He was thrown over a fence at the Royal Showground onto a concrete block and smashed his left arm that permanently damaged a few nerves.

Unable to work, Medhurst was convinced by his family to take on the role of babysitter for the next year and he helped raise his granddaughter Kelly while his son and daughter-in-law dealt with the horses during the day.

Medhurst admitted in an interview with this writer about three years ago that he got as much enjoyment out of babysitting his granddaughter as he did working with the horses.

Medhurst said he had some good horses over the years but one that stood out was Penn’s Boy that won 40 races and included an Easter Cup and Metropolitan Cup.

His other handy horse was Top Byrd that won a race in Victoria and after Medhurst sold him he went on to win in Western Australia.

Other horses to take pride of place on Medhurst’s photographic wall of fame are Loadatar, Captain Charles that won six of his first seven starts, Prancing Peter and Our Spider that Medhurst rated a “very fast horse”.

Medhurst is survived by his children Laurence, Wendy, Paul, Helen and Zane and their respective families.

Medhurst’s funeral service will be held at New Norfolk on June 30 at 2.00pm