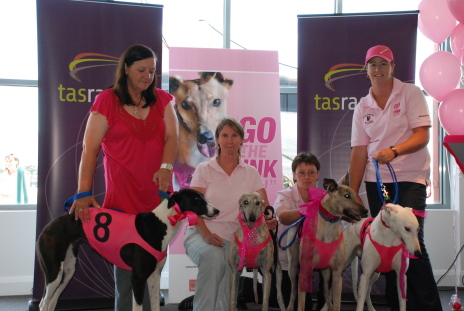 TASMANIAN greyhound racing has made a sizeable contribution to the McGrath Foundation courtesy of the state’s involvement in the Go The Pink Dog campaign.

February’s Go The Pink Dog! campaign came to a close last night and it raised $120,500 for the McGrath Foundation, of which Tasmania contributed $7500.

During February 16 chasers wearing the pink vest saluted at Tasmanian greyhound meetings with each win securing a donation of $500 to the McGrath Foundation.

“Facts such as 1 in 11 women will be diagnosed with breast cancer before their 75th birthday and breast cancer being the most common cause of cancer death for women in Australia clearly indicate why awareness campaigns are required,” said champion cyclist Anna Meares who put her name and reputation behind the campaign.

“It is largely because of awareness campaigns that women have more knowledge and it is shown very clearly that early detection can, and does, reduce the likelihood of death.”

“Count me in any campaigns to raise awareness”, Meares said.