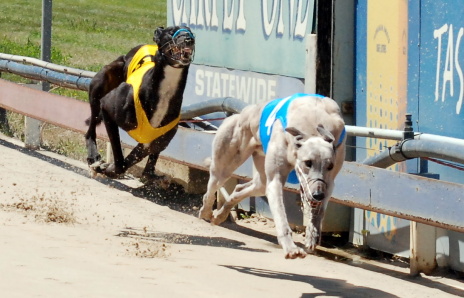 TASMANIAN greyhound trainer Debbie Cannan notched the biggest win of her training career when St. Pierre led all the way to win the Group 1 Australian Cup over 515 metres at The Meadows in Melbourne last night.

St. Pierre began well from box two and had enough speed to hold the lead heading out of the first turn and he extended that lead down the back stretch.

With the even money favourite ($2) High Earner hot pursuit Cannan’s dog found plenty when the pressure was applied and went on to defeat High Earner by two lengths with Mid Levels third and just in advance of White Knuckles.

Despite winning his heat impressively, St. Pierre was sent out a $16.80 outsider.

Cannan, who has only been training for just over four years, has always believed St. Pierre to be the best she has trained and the Christopher Nut-owned dog proved that last night.

Nutt and Cannan have shared a great working partnership for the past year or so and no doubt this brilliant national Group 1 win will further enhance that relationship.

She learned her training skills from Medhurst and she has always maintained that had it not been for that grounding and advice she would never have been able to achieve the success that has come her way in the past three years.

Medhurst has since returned to training to help bolster Tasmania’s training ranks and he took no time to get back into the winner’s circle.

Cannan shows great affection for greyhounds that are domiciled in her kennels, evidenced by the “good luck” kiss each dog gets when placed in the kennel by their trainer.