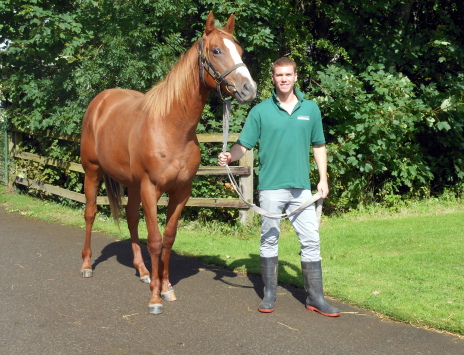 Tasmanian, Sam McMillan, winner of the Marcus Oldham International Stud Management Award UK, is directing his career from England and Ireland while increasing his knowledge of the international Thoroughbred Industry.

Having arrived in England in January Sam is spending this year working for Lanwades Stud and St Simon Stud in Newmarket Cambridgeshire and at sister stud, Staffordstown, in County Meath Ireland.

“Newmarket is an amazing place because the training tracks, or gallops as they call them, are dotted all around town,” said Sam. “ For example, as I drive into town I pass the most famous of the gallops which is called the Heath, and often have to stop and wait for long strings of horses to cross the road on the way for their morning work.”

Gaining valuable yearling experience, Sam said, “Handling yearlings is a great way to learn about horses because it is so hands on. We are kept very busy grooming, walking, handling, washing, and as Lanwades in general sell only colts, we’re kept on our toes.”

Keen to learn as much as possible about the Thoroughbred, Sam enjoyed an evening lecture series at the English National Stud. During a visit to the Aga Khan’s Gilltown Stud at the Curragh racetrack in Ireland he was lucky enough to meet the world champion racehorse, Sea the Stars, which is now standing at stud.

Sam also attended sales at the historic Tattersalls yards in Newmarket and race days at the Newmarket Rowley Mile racecourse, and Goffs and Tattersalls yearling sales.

In leisure time he’s holidayed in Spain, watched Le Tour de France in the Pyrenees and takes an hour’s train ride to visit family and friends and the sights in London.