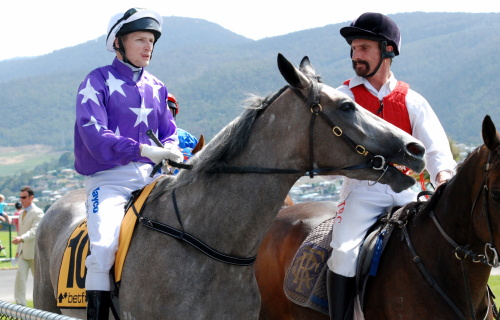 The filly endured a very hard run as a result of being held four-wide through the first turn before eventually surging forward to settle second behind the eventual winner.

Despite the devilishly hard run the filly, with Craig Newitt aboard, kept finding in the straight to be beaten less than half-a-length.

Teardrop Rock races in the Star Thoroughbreds colours and Star’s managing director Denise Martin said the filly would return to Sydney on Friday.

“We have decided to give the filly a spell. She had a very hard run in the Hobart Guineas and while she ate up well after the run and was very bright the next day, Gai believes she will be best served by taking a break from racing,” Martin said.

Talented sprinter Princess Quality will now carry the flag for the Waterhouse stable in the coming weeks.

Princess Quality arrived in the state two weeks ago, the same time as Teardrop Rock and is being stabled at Spreyton with top trainer Barry Campbell.

The mare will have her first start in the state in the $150,000 Tasbreeders Bow Mistress Trophy over 1200 metres on Derby Day (February 5).

Provided the mare emerges from that race unscathed she will more than likely progress to the $100,000 weight-for-age Veolia Environmental Services Vamos Stakes over 1400 metres at Mowbray on Launceston Cup Day, February 23.