Temajim ends campaign on a high 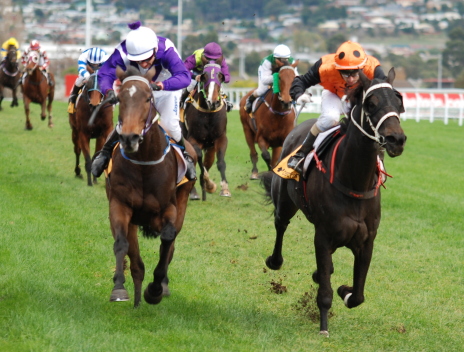 DEVONPORT thoroughbred trainer Michael Trinder has earned a reputation as a master horseman and astute trainer of hurdlers and steeplechasers.

Now it is fair to say Trinder would be grinding his teeth and letting off a bit of steam after reading that opening paragraph because he doesn’t like being stereotyped.

However, if a spade is to be called a spade then the reference was accurate.

In fairness to the astute mentor his ability to train horses, no matter the discipline, is unquestionable and he would be a worthy adversary to any trainer in the nation if he was given equal quality livestock with which to work.

It will be no surprise if Trinder finds himself in the limelight during next season’s Tasmanian Summer Racing Carnival courtesy of the efforts of two promising stayers he has in his midst in Temajim and Royal Miswaki.

Trinder rates Temajim a handy and improving stayer that, until last Sunday, was best-served on rain affected going.

But after the five-year-old ran the Devonport Cup trip in a slick 1m.57.63s to set a new record the trainer said he might have to rethink his assessment of the gelded son of Clangalang.

“I believed Temajim was definitely a wet track horse but after running a track record on a firm track on the synthetic I probably have to raise the bar a bit in my assessment of him and of what he might be capable,” Trinder said.

Temajim has gone from strength to strength this preparation winning three times from six starts at distances ranging from 1650m to 2100m.

“I have a reputation for working my horses hard but this horse absolutely thrives on hard work and that’s probably what makes him so hard to beat.”

“On the morning before the race he won in Hobart over 2100m I swam him seven laps of the pool at Spreyton and he did the same last Sunday morning before he won at home (Spreyton),” he said.

“Royal Miswaki will follow the same path as Temajim next preparation and I find it hard to separate the two in terms of staying ability and toughness.”

“However, Royal Miswaki has an issue in that she can have an aversion to the barriers and that has given me a headache trying to find ways to sort that issue out.”

“But overall Royal Miswaki is a talented galloper and should she ever decide to discard the barrier rogue trait she could be a contender in the major cups.”

“As she’s got out to the longer distances she has really shown her staying prowess. She has developed into a real dour stayer,” he said.

Royal Miswaki showed enormous potential as a two-year-old winning the Alfa Bowl on debut and then ran third to Trinder’s star juvenile Strike The Tiger in the $150,000 Gold Sovereign Stakes.

Trinder has a nice team of young horses including two-year-old Sensationalize (x Dylan Thomas) that made an auspicious debut at Spreyton last Sunday.

“On her trackwork and how she has progressed this past month I thought Sensationalize would just go around and win last Sunday but she finished a dismal last so I’m at a quandary as to what happened.”

“Maybe I just became confused and that age may be catching up with me,” he quipped.

It just proves there is no such thing as a certainty in racing.