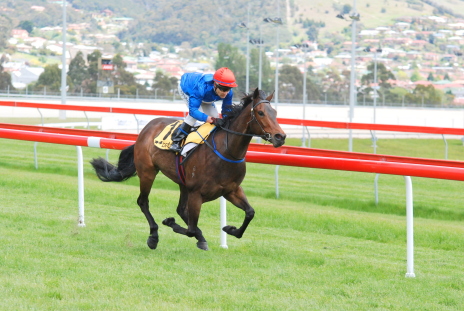 Well bred filly Terra Amata looks set for a good season following an effortless win in a maiden over 1000 metres at Tattersall’s Park in Hobart today.

With reigning premier jockey Stephen Maskiell aboard, the three-year-old showed good early speed to lead and then toyed with her rivals on her way to an emphatic win over Philanthropy and Senor Claude.

The Charlie Goggin and Luella Meaburn-trained filly debuted in May with a game second to Mister John in Devonport after which she was sent for a spell.

She trialed in Hobart early in the week and was as emphatic, scoring by many lengths.

Goggin has always had an opinion of the daughter of Strategic that is owned by a Prime Thoroughbreds syndicate managed by Joe O’Neill.

The well backed Summer Downs had to be pulled up owing to a stirrup strap snapping during the race.

It was a shaky start to race riding for apprentice Siggy Carr who would have been nervous enough without having to deal with such an important piece of gear breaking at her first race ride.

But Carr was up to the task. She didn’t panic and was able to ease the horse down and bring her back into the unsaddling enclosure without any fuss.

Listen to what co-trainer Charlie Goggin had to say about Terra Amata’s maiden win – click here .