Testa Gee Gee has Gold Sovereign in his sights 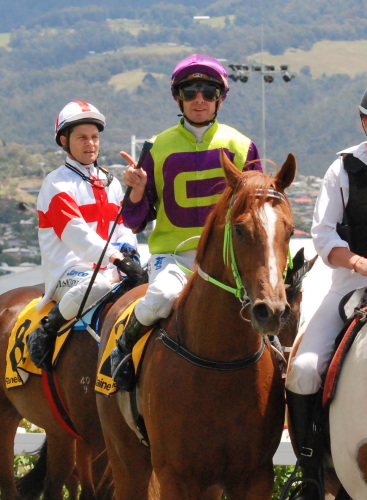 BRIGHTON trainer John Luttrell is eyeing the $100,000 Gold Sovereign with his well bred two-year-old Testa Gee Gee after the gelding scored an emphatic win in a 2YO Maiden Plate over 1000 metres at Tattersall’s Park in Hobart today.

With top Victorian jockey Peter Mertens in the saddle, Testa Gee Gee ($4.10) eventually found the front and led comfortably to the home turn and when Mertens gave the gelded son of Testa Rossa more rein he burst clear and went on to score by over six lengths from the heavily-backed favourite Modo Vinco ($1.60) with Bachelor Babe a half-length astern.

Testa Gee Gee finished fifth on début in Launceston last month but was only four lengths from the winner Kenjorwood and he made up a lot of ground late.

Mertens said the gelding has a future.

“Once this horse learns what it’s about he will be a very good horse,” Mertens said.

Listen to what trainer John Luttrell had to say about Testa Gee Gee’s win – click here .