The “Baron” acknowledged for commitment 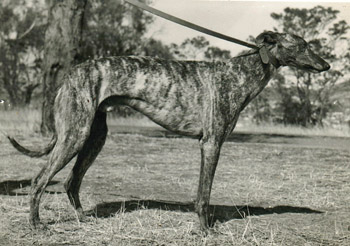 THE late Viv Beresford was recently rewarded for his commitment to the Tasmanian greyhound racing industry by being inducted into the Australian Greyhound Racing Hall of Fame.

Affectionately known as “The Baron”, Beresford was considered a pioneer of professional greyhound training inTasmania.

He embarked on his training career in 1947, although he acquired his first racing dog at age 10 but when it died of distemper his interest in greyhounds waned until he bought a bitch named Laura Murray 16 years later.

That purchase in a pub in late 1947 for 15 pounds would change his life and that of many whom he fostered into the sport.

Her status as a broodbitch was further elevated when her offspring kept producing winners and bitches from the line were still throwing winners as late as the 1970s.

Beresford’s success was almost immediate with his kennels atGlen Dhu Streetin Launceston housing some of the best chasers ever to grace Tasmanian tracks over four decades.

“Dhu” became the prefix of many of his early racing dogs with Irish Dhu one of the best but later the more common moniker was Baron or Baroness which became Beresford’s trademark.

Baron Dhu was one of his most outstanding dogs, winning a heat, semi and final of the 1952 Hobart Maiden Thousand series as a 22-month-old pup and 28 days later he won the Hobart Thousand.

Berersford rated it his greatest training achievement to that time.

In the late 1950s Beresford purchased about 15 acres at Evandale, about 15 kilometres south-east of Launceston, where he established kennels and a straight training track.

He lived in a railway train carriage on the property until his house was built in 1962.

As a bachelor he afforded every bit of his time to greyhounds until he married Janet Cartledge in 1972 that coincided with the purchase of an adjoining 50 acres at Evandale.

In the mid 1970s Beresford became involved with the Evandale Council and with much of his time taken up with council business he handed over the greyhound training reins to wife Janet.

She continued to train until well into her 80s with Viv there in a supervisory role.

She once won eight races in a week and trained four winners on the card at the oldWhiteCitytrack in Launceston comprising Baron Band and three of his litter brothers.

Whilst Viv Berresford was a legend of greyhound racing, other aspects of his life are worthy of mention.

A qualified fitter and turner with the Government Railways, he spent the World War Two years as an RAAF Engineer, which included two years as Technical Instructor at the Test Pilot Training School at Laverton.

He spent twenty five years as a Northern Midlands Councillor, including Warden.

He was a Justice of the Peace, the 1993 Australia Day Citizen of the Year for Evandale and he received greyhound racing’s Outstanding Achievement Award in 1991.

In 2000 he was awarded the Medal of the Order ofAustralia(OAM) for his service to Local Government and he was inducted into the Tasmanian Greyhound Racing Hall of Fame in 2009.

While alive, Viv expressed particular thanks to fellow trainers Bill Day and Reg Thomas for their advice, especially on breeding matters and he stood out Arthur Morgan and Peter Wright as the outstanding administrators of his time.

The fourteen time leading trainer (including 10 in succession) was proud of Janet’s training achievements and claimed that dogs responded better in general to women as they are usually more meticulous and have more patience.