The Blyth legacy lives on at Mowbray 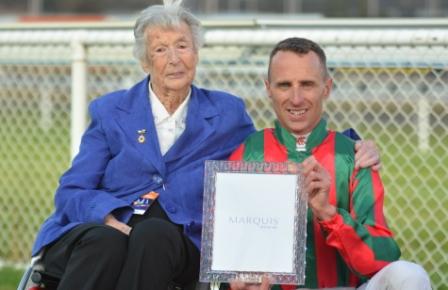 He was pleased for the horse and connections but he was because he was rapt in winning the race that was named in the late Charlie Blyth’s honour.

Blyth passed away four years ago after a 60-year stint as a groundsman and multi-tasker with the Tasmanian Turf Club and his wife Sylvia also worked at the club tending to the kitchen that provided food, drinks and a motherly figure to the jockeys over five decades.

Sylvia was in attendance last night despite still recovering from a heart attack five weeks ago.

“I am so thrilled that the club has seen fit to name a race after Charlie and offer a trophy to the winning jockey because they (jockeys) are like my family,” Mrs. Blyth said.

McCoull also was thrilled to have won the race.

“When I was just starting out Sylvia was fantastic to me and when she stopped working at the club a few years ago we really missed her,” McCoull said.

“It’s great that we have a race named in Charlie’s honour and that Sylvia is here to present the trophy because they were both an important part of this club,” he said.