The Champ does it again in Thomas Lyons 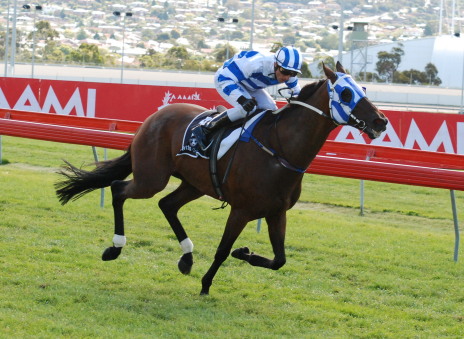 STAR Tasmanian sprinter-miler Conquering had most of the 13,500 spectators at yesterday’s AAMI Hobart Cup meeting screaming with joy when he outgunned a quality line-up to win his third Thomas Lyons Stakes over 1400 metres at Tattersall’s Park.

The Charlie Goggin-trained eight-year-old led the field to the home turn but was clearly headed by race favourite Royal Ida but in his usual never-say-die approach he dug deep, regained the lead and went on to score by almost a length from the fast-finishing outsider Rocky Times ($37) with Royal Ida a length away third.

Conquering has been one of Tasmania’s favourite and best-performed horses for the past four years and Goggin confirmed his stable star would be attempting to win his third George Adams Plate (1600m) at his next outing at the TOTE Racing Centre on Launceston Cup day.

The gelding was ridden by Brendon McCoull who praised the son of Dangerous.

“He is just so courageous. He was probably looked a beaten horse on the corner but he just never gives in,” McCoull said.

Goggin was elated and confirmed the horse would have his next start in the Tatt’s George Adams Plate over 1600m on Launceston Cup day on February 23.

Listen to what trainer Charlie Goggin had to say about Conquering’s latest win – click here .