The Cleaner a cups prospect? 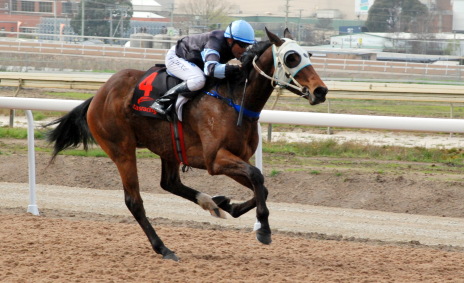 PROMISING front-running stayer The Cleaner extended his winning streak to four when he gave his rivals a galloping lesson in the Shaw Contracting Benchmark 78 Handicap over 1880 metres on the new synthetic track at Devonport on Sunday.

The Cleaner has progressed through the classes this preparation with consummate ease winning over distances ranging from 1600m to 2100m and his trainer Mick Burles is confident the lightly raced four-year-old can make the grade in staying ranks.

The Cleaner (Savoire Vivre-Dash Of Scotch) has only had nine starts for four wins and a second for almost $40,000 in stakes.

Mauritius-born apprentice Jacques “Johnny” Luxe has been aboard for all of the gelding’s four wins and Burles said the partnership most likely won’t be broken – in the near future at least.

The Cleaner showed his customary early speed but the pack was hot on his heels from the 800-metre peg, which was unlike his two previous outings where he led clearly and kept grinding away to outstay his rivals.

He was joined and almost headed nearing the home turn but when Luxe called on the gelded son of Savoire Vivre to extend he quickly put two lengths on his rivals and went on to score by 2-1/2 lengths from Sophistication with Uboa a short half-head away third.

Burles has big plans for The Cleaner with the Devonport Cup as a possible target.

Listen to what trainer Mick Burles had to say about The Cleaner’s latest win – click here .