The Detonator to be aimed at country cups 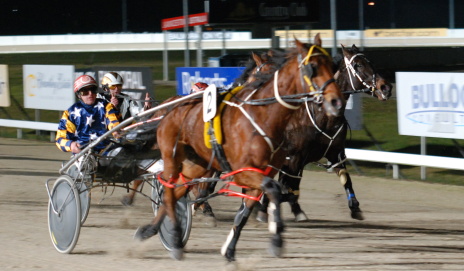 THE Detonator will be aimed at a country cups campaign if he emerges from a short spell with the same gusto he has shown this preparation.

Leading harness trainer Grant Hodges described The Detonator’s latest win at The TOTE Racing Centre last Sunday night as “typical of a horse that always tries to do his best”.

With Ricky Duggan aboard, The Detonator (Armbro Operative-Exclusive Girl) produced a powerful finish to score from Alma Grant and Matesforever in a strong C2-C3 event over 2200 metres.

It was the first leg of a winning double for driver Ricky Duggan who also scored aboard the Hodges-trained Teejay Fella in the Bullock Consulting pace over 1680 metres.

The gelding, raced by prominent owner-breeder Rodney Gould, cost only $2500 as an unraced three-year-old but he didn’t start racing until he was five.

Gould has had a lot of success over the years with his former star mare Cher Mon Amour his best-performed.

Cher Mon Amour won almost $100,000 in stakes and was Tasmania’s best juvenile filly in 2002-03 with the Cadbury Sweepstakes and Evicus Stakes two of her five wins from six starts as a two-year-old.

Hodges prepares a few horses owned or part-owned by Gould who is on the permanent staff at Hodges’ Bridport stables.

Listen to what trainer Grant Hodges had to say about The Detonator – click here.