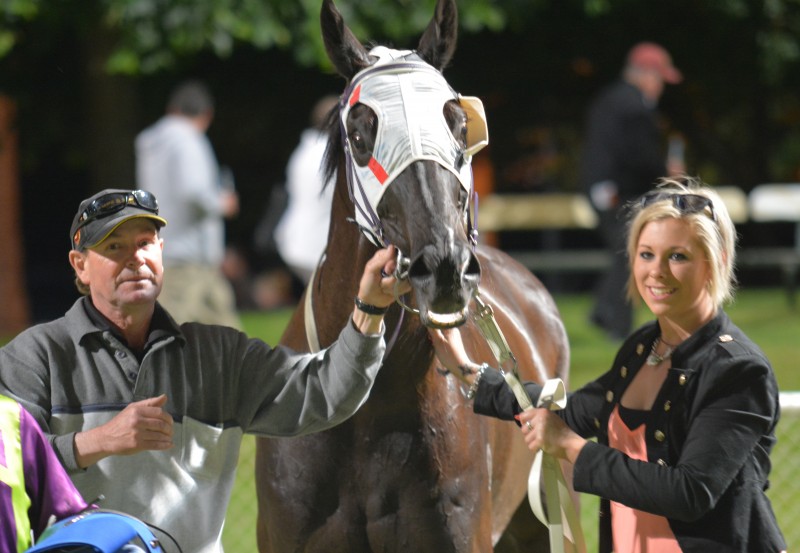 STAR Tasmanian galloper Geegees Blackflash has the chance to establish a record that may never be broken when he steps out in the weight-for-age $100,000 Kevin Sharkie Tasmanian Stakes over 1600 metres under lights in Launceston tonight.

Geegees Blackflash needs only to earn another $13,450 in prize money to reach the magical million dollar barrier, all of which has been won in Tasmania.

There have been other Tasmanian owned and trained gallopers that have accrued more than $1 million in stakes including Lady Lynette and Sydeston but Geegees Blackflash has won every cent without having left the state.

Geegees Blackflash has started 58 times for 20 wins and 23 minor placings with his major wins including a Group 3 Hobart and Launceston cup and the 2010 Tasmanian Derby, along with numerous weight-for-age races and quality handicaps over the past four seasons.

The John Luttrell-trained gelding has captured the imagination of not only the Tasmania racing public but that of the nation.

It he could win to become an equine millionaire it would be fitting because finishing second to earn the required amount to get the $1 million somehow doesn’t fit the picture that this horse has painted during his racing career.

He has earned a reputation as a courageous galloper and one that looms in his races to deliver the knockout blow to his rivals.

Luttrell is confident his stable star can win.

“He’s hasn’t gone backwards since he won two weeks ago and his trackwork rider Christie Burt said it was the best the horse has worked when he did his fast work the other day,” Luttrell said.

“He will appreciate going to the 1600 metres so as far as I’m concerned he only has to take his recent form into this race to win,” he said.

Luttrell also is keen on the chances of his unraced two-year-old Gee Gees Vicki winning on debut in the Charlie Blyth Memorial 2YO Maiden Plate over 1100 metres.

Luttrell has already produced a handy youngster in Gee Gees Top Notch that won the Alexandra Plate recently but he says Gee Gees Vicki is superior.

“On the training track Gee Gees Vicki has always had the wood on Gee Gees Top Notch so I think that’s a good enough guide to suggest this filly can win on debut,” he said.