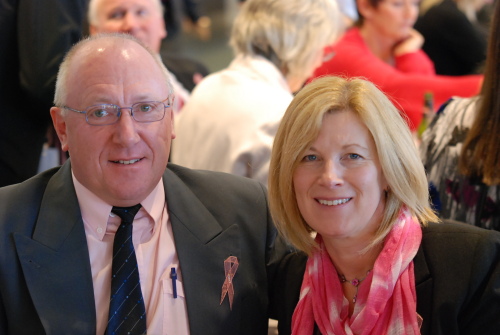 THE success of last Sunday’s (May 30) Think Pink Day at the Tattersall’s Park race meeting can best be measured by the amount raised on behalf of the National Breast Cancer Foundation.

Just over $28000 was raised at the event that boasted over 600 people who wined and dined their way through the meeting, which was interspersed with auctions of racing and similar memorabilia as well as a special guest appearance of Mills & Boon author Melanie Milburn.

It was the third time the event has been held at Tattersall’s Park and event organiser Judi Adams said this year’s edition was as good as previous years.

“The event is designed to raise funds and awareness of breast cancer for the National Breast Cancer Foundation,” Adams said.

As well as 10 feature races, the race day also incorporated silent and live auctions, a raffle door and spot prizes, a Fashions on the Field event sponsored by Ci Simon, Cue and Cadbury also was a major sponsor .

George Self and his panel of mystery judges chose the following best dressed attendees on the day:

One jockey in each race wore racing silks courtesy of Rhonda Hall of 12 Oaks Equestrian that feature the National Breast Cancer Foundation’s logo and colours.  The “Go the Pink Silks” Promotion whereby firms were encouraged to support the horse in each race whose jockey wore the silks resulted in three winners on the day.

Guest Speaker Melanie Milburne wowed the crowd with a live enactment of some love scenes from her best selling Mills & Boon romance novels.

Photos from the day will soon be posted at the National Breast Cancer Foundation site – click here .

This annual race day event is scheduled for next year to go ahead on 5 June 2011.

Contact Judi Adams on 0415294610 (eventstas@nbcf.org.au) in relation to the NBCF, the event coordination, or for further info on the day’s program.