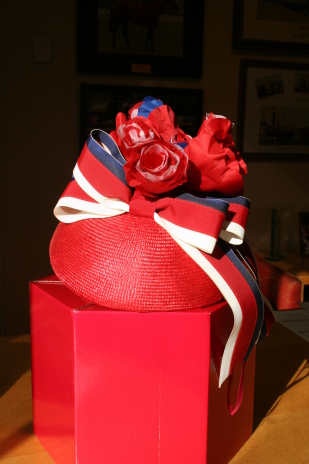 THE fourth annual “Think Pink Day” thoroughbred meeting at Tattersall’s Park on Sunday (May 29) promises to be the best.

Event organiser Judi Adams expects another packed house at Elwick on Sunday with hundreds of auction items up for grabs including some items never before offered at a capital city race meeting.

The eight-race program boasts the Think Pink Hygiene Cup that has attracted strong nominations and some of the state’s up and coming stars will be saddled up through the day.

But the main focus for most of the 600 who have booked for the luncheon will be the auction items that includes a hat donated by Australia’s Queen of the Turf Gai Waterhouse.

Another much sought after item will be the accommodation package at Vinery Stud for up to five couples (10 people) and a personalised tour and stallion parade, as well as the addition of a stud fee from Widden Stud with “Snippetson” on offer on the day.
Reserve bids can be made to me on 0415294610 by cob 27/05/2011 for those who cannot be in Hobart for the event.

The Luncheon charity event MC is Shantelle Rodman, auctioneer Hank Petrusma will oversee the selling of all items with special guests Caroline Searcy of TVN and Matthew Hill of Sky Channel sure to make for an interesting and entertaining afternoon.

Also on offer are prizes for best dressed as judged by Wendy Kennedy, George Self and Sarah Fitzpatrick-Gray, a major raffle, charity pin prize contest and featuring live and silent auctions as well as door prizes.

Guests are expected to be seated by 11.30am.

For more information contact Judi Adams 0415294610 or via email eventstas@gmail.com