Thirsty Mach does it again 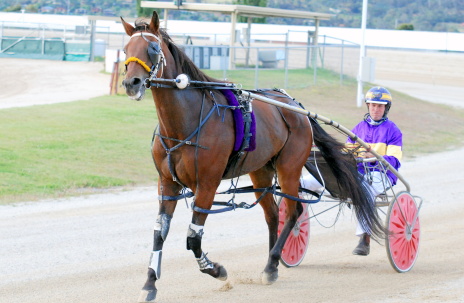 TALENTED four-year-old Thirsty Mach scored one of the best wins of his short racing career when he proved too good for a strong C2-C3 field of pacers at Tattersall’s Park in Hobart tonight (Sunday).

With his trainer and part-owner Rohan Hillier aboard, Thirsty Mach worked hard three-wide for the last lap but made light of the task to eventually go on and score by almost five metres from Espshiluckylombo with Prettyboytoby a c lose-up third.

It was Thirsty Mach’s third win from his past four starts and Hillier was delighted with the effort.

“He had to do a bit early and then was forced to work hard the last lap but he did it well and it probably one of his best efforts,” Hillier said.

“The horse has issues and we have to manage him but he has been in top form of late and I expect him to keep winning while he’s in this sort of form,” he said.

Listen to what trainer-driver Rohan Hillier had to say about Thirsty mach’s latest win – click here.