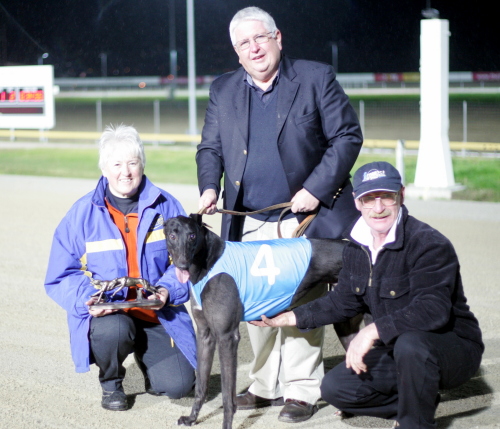 TRAINER Leigh Wood has probably run out of superlatives to describe his feelings for classy stayer Thirteen Black.

At Tattersall’s Park in Hobart last night Thirteen Black produced another brilliant performance to emerge triumphant in the final of the Greg Fahey Distance Championship over 599 metres.

Thirteen Black was sent out an odds-on favourite and as usual he gave his backers some cause for alarm soon after the start.

But when he lobbed fourth and in the clear nearing the top turn those who took the shorts would have been making their way to the queue to collect.

“This dog is a very good stayer and his record speaks for itself,” Wood said.

“He got into too much trouble in his heat and he wasn’t all that flash away tonight but he got some clear running and he knows how to finish off his races,” he said.

Common Interest (3) set the pace and held a commanding break at the top turn with Rotation (7) and Where’s Ned (8) making efforts to close the gap and Thirteen Black poised to pounce.

When Thirteen Black knuckled down to his task in the home straight he hauled in the leader and went on to defeat Where’s Ned by 1-1/2 lengths with Common Interest hanging on for third almost two lengths astern.

Wood has the state heats of the National Distance Championship in his sights with Thirteen Black and on exposed form he looms as an early favourite to represent the Tasmania.

Where’s Ned was game in defeat and this Tony Dawson-trained dog also has what it takes to make an impact in the heats of the national series.

The Mick Louth-trained Sitka impressed in winning his Greg Fahey Distance Championship heat but he failed to flatter in the final from box two.

Sitka was slow to begin and when he copped a slight check it was the end of the penny section.

Louth’s second stringer Sandhog worked home well to finish fourth and he is bound to make his way to the state heats of the national distance series.