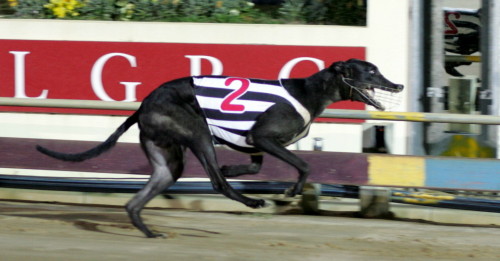 Whitemore trainer Leigh Wood has had some good dogs over the years but it has been a while since he has produced one that could go all the way.

That was however, until a youngster by the name of Thirteen Black began his racing career about three months ago.

In Launceston on Monday night Thirteen Black confirmed his status as one of the state’s brightest young prospects when he powered home to win the $7500 Gold Collar final over 515 metres.

Thirteen Black gave an elite field a start and a beating.

He began only fairly from box two and spotted the leaders Hellyeah Geoff (8) and Kialdu Anna (6) six lengths heading down the back stretch.

But when he slipped into overdrive he quickly hauled them in and went on to score comfortably from Hellyeah Geoff with Kialdu Anna hanging on for third in advance of Posh Di.

Wood said he expects the dog to make it to top grade but that he would take it one win at a time.

“The dog is starting to show the ability that I thought he had as a very young dog,” Wood said.

Thirteen Black is owned and raced in partnership by Karly Cuthbertson and Sally Wilson.

Wood said he would resist the temptation t tackle the Hobart Thousand but instead would concentrate on the Breeder’s Classic in Launceston in the New Year.