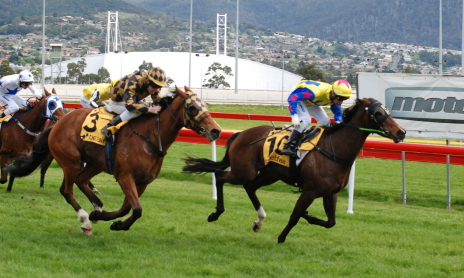 ABOUT a year ago the owners of a promising and lightly raced four-year-old Three Crowns consented to the filly having stem cell treatment on a damaged tendon that threatened to end her racing career. At Tattersall’s Park in Hobart on Sunday the now five-year-old mare rewarded her owners and trainer, Gary White, with a resounding first-up win in a strong class one handicap over 1100 metres. With in-form apprentice Bulent Muhcu aboard, Three Crowns ($5.40)produced a scintillating finish to score by almost two lengths from race leader Star Of Egypt ($31.70) with rank outsider Vision Of Beauty $145) a length away third. It was an amazing result and one that trainer White described as “probably one of the most rewarding wins we’ve had in years.” Three Crowns won as a three-year-old and she also notched three minor placings from only six starts leading up to Sunday’s assignment. But when she damaged her tendon it looked like she might never be given the chance to realise her full potential. Even after the stem cell treatment there was doubt she would ever return to racing. “There are a lot of people with big smiles on their faces today and that’s because of all the hard work and patience that has gone into this mare’s recovery process,” White said. “Especially Burtie (pre-trainer Christie Burt) who put countless hours into helping this mare get back to racing,” he said. Listen to what trainer Gary White had to say after Three Crowns won at her first start in 14 months – click here .