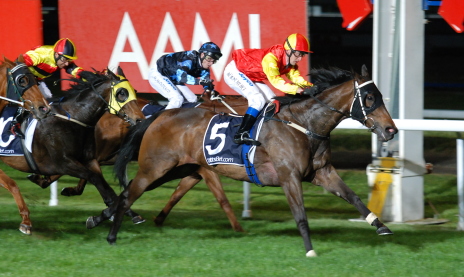 Three Crowns (Bulent Muhcu) resumed from a lengthy spell in Hobart three weeks ago with a game win in a strong class one handicap over 1100 metres after which her trainer Gary White explained she has been off the scene having stem cell treatment to a tendon injury that threatened to end her racing career.

The four-year-old mare is a day-to-day proposition but after this most recent win connections can look to the future with more confidence given the way she demolished her rivals in a strong class two handicap over 1200 metres.

Three Crowns (Planchet-Queen Of Denmark) travelled on the pace and when apprentice Bulent Muchu called on the mare for the supreme effort 200 metres out she moved clear despite having been caught three-wide to the home turn.

She staved off strong challenges from placegetters Double Unique and From The Bronx.

“She was very brave the way she toughed it out and I couldn’t be happier with the way she’s taken to racing this time in,” White said.

“The owners took a chance the mare having the stem cell treatment but from that she’s shown so far it was money well spent,” he said.