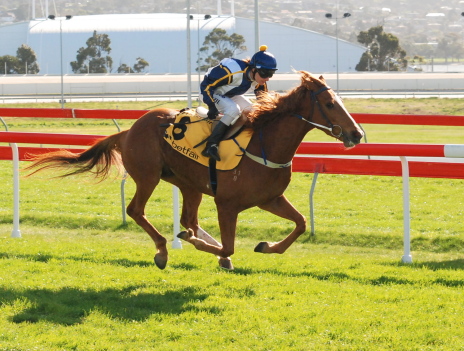 LIGHTLY raced four-year-old Tiger Jack notched his second win this preparation when he gave his rivals a galloping lesson in the McCarthy & French Class 1 Handicap over 1200m at Tattersall’s Park in Hobart today (Sunday).

Tiger Jack was given the run of the race by his rider Shannon Brazil who had the Kempinsky gelding settled just off the pace and travelling comfortably to the home turn.

When the gap appeared and Brazil guided her charge to make his run the gelding let down like a good horse and cruised to effortless win over outsider Atlanta King with the well-backed Bustaringer a close-up third and just ahead of King Casper.

The pace was set by Testa Gee Gee and stablemate Tango’s Gee Gee and they were still battling it out for the lead 200m from home but they started to wilt 150 metres out.

Tiger Jack is trained by Peter Brazil who has always touted the gelding as a potential top liner, a view shared by his daughter and the horse’s rider.

Listen to what jockey Shannon Brazil had to say about Tiger Jack’s latest win – click here .