Tiger Jack lives up to expectations 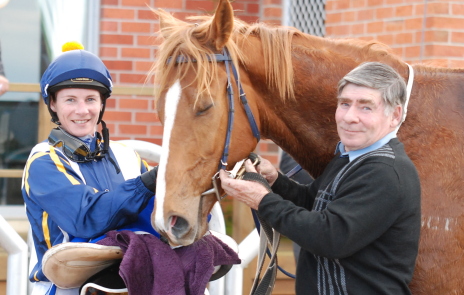 A DECENT break in the spelling paddock has worked wonders for promising three-year-old Tiger Jack.

The Peter Brazil-trained gelding produced a powerful finish to score a runaway win in the Tapeta Footings 3YO and Upwards Maiden Plate over 1000 metres at Spreyton Park on Sunday.

With the trainer’s daughter Shannon Brazil aboard, Tiger Jack travelled sweetly midfield to the 500m peg where the rider called on the gelded son of Kempinsky to extend and he responded well.

Tiger Jack pounced on the leaders 200 metres out and went on to win by a length from Onthecountofthree (Yassy Nishitani) with Zarimby (Anthony Darmanin) only a long neck away third.

Tiger Jack had only two starts in his first preparation for unplaced efforts but he showed enough to suggest he would win races.

Listen to what trainer Peter Brazil had to say about Tiger Jack’s maiden win – click here .