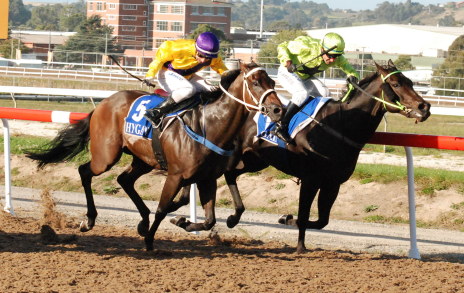 FORMER Tasmanian two-year-old of the year Strike The Tiger looks set to return to the winner’s circle in Launceston tonight in an open handicap over 1100 metres.

Strike The Tiger won the $150,000 Gold Sovereign Stakes two years ago after which the gelding was dispatched to Victoria and spent over a year in the care of Leon and Troy Corstens at their Romsey stables.

The gelding returned to racing in Tasmania on his home track at Tapeta Park Spreyton on April 1 and went within a half-head of make a triumphant return.

The gelded son of Bel Esprit settled three-back the fence and worked into the race from the 550-metre peg and when called on by his rider Anthony Darmanin he sprinted quickly but his condition gave out about 50 metres from the line.

With that run under his belt and a good barrier draw tonight he looms as one of the best bets on the eight-event card.

It is not an overly strong open handicap with The Invincible One and last-start winner The Son Shines his main rivals and neither of them are fully fledged open class performers.

Strike The Tiger is prepared at Spreyton by Michael Trinder who has no doubt given the gelding plenty of work and he should strip fitter for this assignment.

The Son Shines caused something of a boilover last time when he defeated Strike The Tiger and The Invincible One but he meets both much worse at the weights but has the services of the inside barrier.