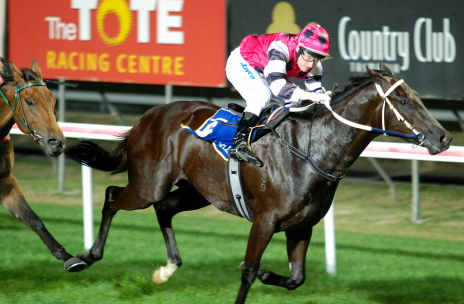 CAULFIELD trainer Jim Mason unveiled a potential star in the form of Tasmanian-bred two-year-old Tiger’s Cub that scored an effortless win in the Magic Millions 2YO Classic over 1200 metres at The TOTE Racing Centre in Launceston last night.

Tiger’s Cub made the trip to Tasmania with a barrier trial at Cranbourne to his credit in which he finished second to the highly promising Boom Baby Boom.

Punters warmed to the gelded son of Hold That Tiger-Grandchildrenslove sending him out the $3.00 favourite ahead of Western Hero and Kenjorwood that finished second and third respectively.

Tiger’s Cub showed good early speed and while the plan was to settle off the pace and hopefully with cover, Newitt opted to send his charge to the lead when nothing else wanted to take control.

It proved to be a winning move. When Newitt called on the gelding to extend he at the top of the home straight he quickly put three lengths on his rivals and went on to score by almost a length from Western Hero with Kenjorwood coming from well back to be a only a head astern.

Mason was delighted with the win.

“I knew we had something after he trialed so well at Cranbourne but given he was a bit underdone tonight he might even be better than I first thought,” Mason said.

Part-owner Alwyn Shaw who bred the gelding was ecstatic.

“What a great result for Jim (Mason) and for Aceland Stud because we bred him, put him through the sale and while he was passed in we eventually sold shares through Jim and we’ve got what looks to be a very handy two-year-old,” Shaw said.

Listen to Peter Staples’ interview with the trainer, owner and jockey after the race –  click here .