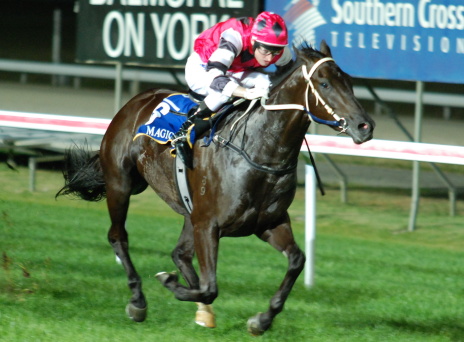 Tiger’s Cub travelled to Tasmania for a debut win in the Tasmanian Magic Millions 2YO Classic over 1200m last Wednesday night and according to Mason the son of Hold That Tiger has not gone backwards since his debut effort.

“The horse has done a treat since his last run and I expect him to improve on what we saw last week,” Mason said.

Tiger’s Cub led last week and when rider Craig Newitt released the reins at the top of the home straight the gelding burst clear and staved off a late challenge from Western Hero that was almost a length astern on the line.

While Tiger’s Cub was impressive, tonight’s assignment is tougher with the Anthony Freedman-trained Cheyenne Warrior likely to be a contender given his impressive debut win at Sandown on the Hillside track three weeks ago in which he held almost a length advantage over Nixon on the line.

The Not A Single Doubt gelding was impressive but it is difficult to take a line through the opposition compared to what Tiger’s Cub defeated.

David Hayes also has made it interesting by asking his unraced Fastnet Rock filly Kincara Miss to make her debut.

Kincara Miss has been to the trials three times, twice in October and more recently at Wangaratta where she was third to Eternal Optimist over 900m.

Western Hero was unlucky not to finish closer to Tiger’s Cub last week but a significant rider change of Shuji Amano off and Dwayne Dunn on will enhance the gelding’s chances of taking the lion’s share of the prizemoney tonight.

The presence of Testa Gee Gee will ensure a hot pace and if he leads, then Tiger’s Cub should secure the gun run on his back from barrier two.

For the latest fixed odds market on the Gold Sovereign .