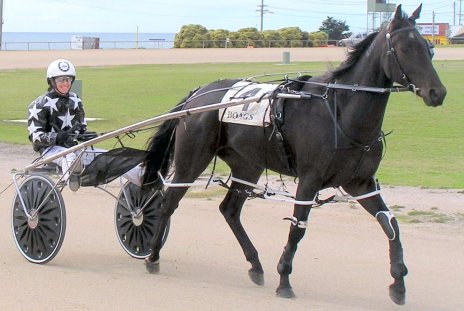 PRETTYBOYTOBY broke through for his first win of the season and in doing so gave driver Gareth Rattray a double.

Prettyboytoby had not won since saluting in C1 mobile in Hobart in July where he scored impressively against strong opposition.

Trainer Melissa Maine gave him two months off at the end of July and since the gelding resumed he has been very competitive with a win and two minor placings from his five outings this time in.

Prettyboytoby (Panorama-Annie Preneur) is a nine-year-old that has been racing for seven seasons.

He began his racing career in Victoria where he won at two at Moonee Valley clocking a mile rate of two minutes and some small change.

Prettyboytoby came to Tasmania as a four-year-old and won two in succession at Devonport but the wins dried up for almost two seasons.

However, he delivered the goods in Launceston two years ago clocking a personal best mile rate of 1m:58.1s in a C1 over 1680 metres with Gareth Rattray in the cart.