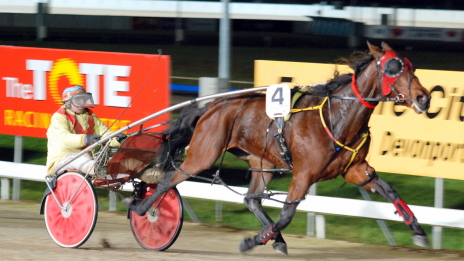 The Christian Salter-trained filly was having her first start since finishing down the track in the final of the 2YO Fillies Breeders Crown final at Melton in Victoria in August last year.

It was little more than a stroll in the park for the daughter of Bettors Delight as she cruised straight to the front and was not troubled to find the line over four metres clear of the well tried Driller Mac ($5.70) with outsider Call The Marshall ($57) only a neck astern.

Cloudy Delight had seven starts in Tasmania last season for six wins and a second.

Salter took her to Victoria where she finished second in an Australasian Breeders Crown semi-final behind Shake It Mama before suffering interference in the final in which she finished near last behind NZ filly Cowgirls N Indians.

Cloudy Delight was bred by Noel and Marlene Salter at their Brighton property, north-West of Hobart.

Salter said at the end of last season that he believed the filly would be even better at three and if her first-up effort is a true indication then she looks set to live up to her trainer’s expectations.