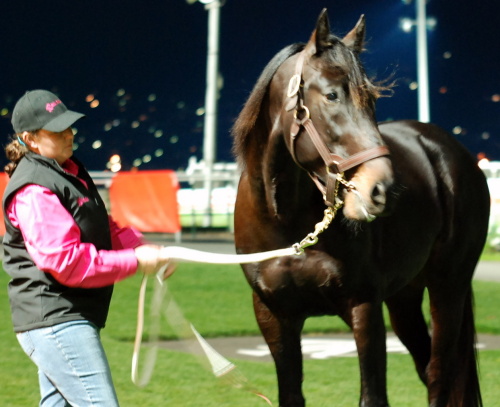 FEW standardbred breeders around the world who would want to debate the fact that Artsplace and Western Hanover have been the two champion pacing sires of the past fifteen years.

So if you owned a mare called Trulyawork Of Art, by Artsplace, why wouldn’t you breed her to Western Hanover.

Well that’s exactly what Kentuckiana Farms planned in 2004 and the product was a well put together colt that goes by the name of Tiz A Masterpiece.

Tiz A Masterpiece qualified as a late two year old at The Red Mile but did not race at two. His racing career commenced in May as a three year old with his defining win coming at the Meadowlands in the $210,000 Oliver Wendell Holmes.

He entered Australia last season with a 1:49 record taken as a three year old and with prize money of $224,730.
His first crop from his debut season at Alabar Stud in Victoria are due to foal in the next month or so and courtesy of a deal struck by Alabar with Big Park Stud in Tasmania the entire will stand this season in Tasmania for a modest service fee of $1800 plus GST.

The well-named stallion paraded in Hobart last Sunday night and created a lot of interest.

Tiz A masterpiece is by one of the all time great sires in Western Hanover – Sire of the winners of over $152 million.

Tiz A masterpiece is beautifully bred on his maternal side as his dam has a perfect record with three $100,000 earners from as many foals 3yo & over.

His second dam is the 1997 Canadian Broodmare of the Year in Town Sweetheart – Dam of 10 winners, including three $500,000 earners.

His full brother Big Bad John is now a stakes winner with a PB rate of 1:54 as a 2yo.

Listen to what Alabar Bloodstock general manager John Coffey had to say about Tiz A Masterpiece – click here.