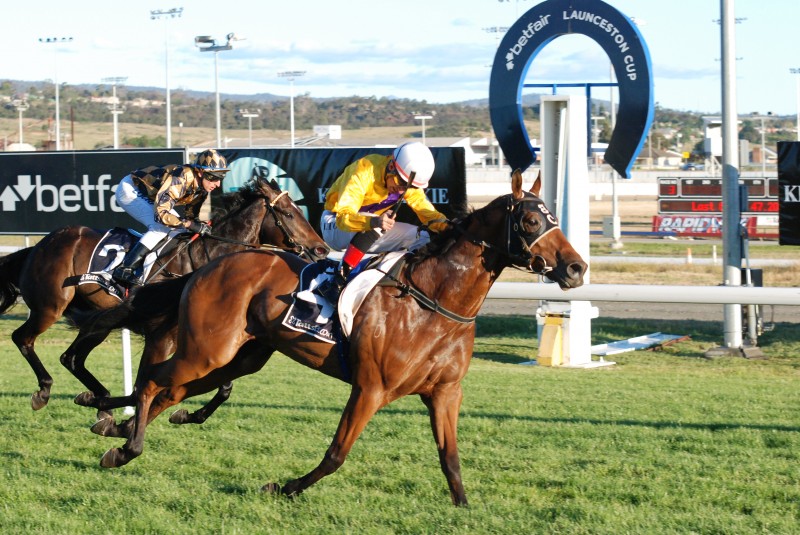 TASMANIA’S leading apprentice Ismail Toker celebrated a treble in Launceston last night after which he revealed he could soon be heading to Victoria to spend an undetermined period of his apprenticeship with top trainer David Hayes.

Toker has been apprenticed to Hall of Fame trainer Barry Campbell for two years and he has made rapid progress this past year.

Last night’s treble took his season tally of winners to 23 to be second and only one behind David Pires on the jockeys premiership table.

Ï am just waiting for all the paperwork to be finalised to spend some time with David Hayes,” Toker said.

“I have had a good night tonight with three winners – I am getting on some very good horses,” he said.

Gwemrae was given a gun ride by Toker, settling her just off the speed and when he eased her through a gap to make her run the daughter of Hard Spun burst clear of the pack.

It Looked for a fleeting moment that Thing One would run past her but Toker’s filly responded magnificently to go on and score comfortably.

Lazy Democracy was first-up from a spell but he had trialled well at Longford with his last trial a close-up third to Arenzano and Sh’Bourne Spirit which apparently went unnoticed as the gelding started at the lucrative price of $8.50.

But the most impressive of Toker’s three winners was Geegees Goldengirl that made it two wins from as many starts this time in.