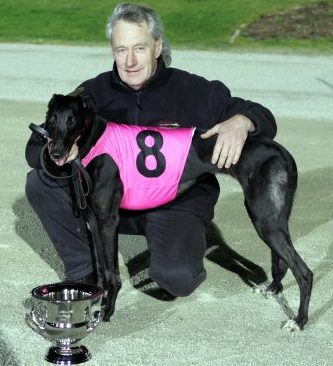 STAR Tasmanian greyhound Topline Doovee returned to racing from an injury-enforced break with a brilliant win in an invitation at Devonport this week.

The Mick Stringer-trained bitch tore a monkey muscle in June and rolled a sesamoid during recovery.

Topline Doovee was given plenty of time to recover and that showed when she gave her rivals a galloping lesson at her first run back on Tuesday.

She flew the lids from box five to lead and stopped the clock at 25.45 for a personal best on the track and one of the slickest times recorded on the track this year.

Topline Doovee won the Group 2 Western Australia Oaks earlier this year and she is about to head to Victoria for a series of races.

“I am rapt with her first run back from the injury and now it’s all systems go for Melbourne,” Stringer said.

“She’ll run in an invitation at Hobart next Thursday and then she’ll go to Melbourne for the Sapphire Classic at Sandown at the end of the month and then on to the heats of the Melbourne Cup,” Stringer said.