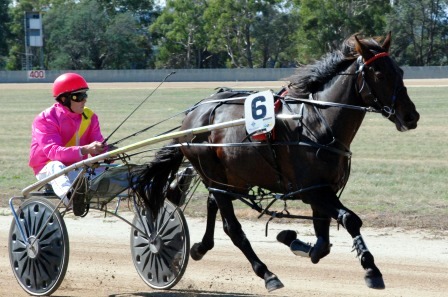 TWO years ago Topup loomed as a potential star winning a couple of three-year-old races in good time and against quality opposition.

He ended his three-year-old season with only two wins but he also notched eight minor placings from 11 starts.

However, an injury sustained in a race at Launceston 16 months ago threatened to end his racing career prematurely.

Topup (Topnotcher-Monicas Next) broke a pedal bone and with time the only sure healer, his owner-trainer Geoff Madden tipped him out to recover with a bar shoe fitted to ensure the injured foot had plenty of support while he roamed the paddocks on his owner’s property at Cressy..

In Launceston last Sunday night Topup notched his first win in 16 months, much to the delight of his owner-trainer.

“That was worth waiting for and while it was not an overly strong C1 it was the run I thought it was the best he’s raced for a long time,” Madden said.

Topup led with the trainer’s son, Troy Madden, in the cart and after he stole a slow quarter the opposition was unable to run him down in the straight.

While the broken pedal bone was Madden’s main concern, the horse also developed a blood disorder that required another spell in the paddock.

“When he returned to racing he had a few starts and was in wining positions but couldn’t finish it off and for a while I thought it was because he was a stallion and was trying to shirk the issue.”

“But I had a blood count done and while it couldn’t pin-point the problem it showed some definite inflammation.”

“I had to treat him with some medication that he couldn’t race on so I had to tip him out again.”

Since returning this time Topup has produced eye-catching runs prior to last Sunday night’s win.