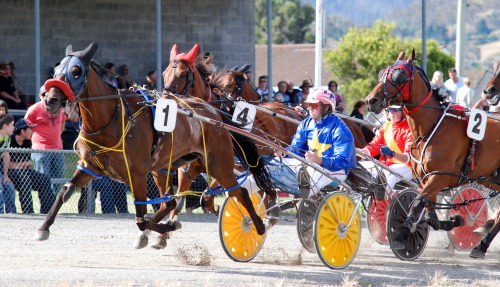 MUCH improved pacer Touchwood Bucksta scored one of the most impressive victories ever recorded in a Norske Skog New Norfolk Cup at Kensington Park Paceway today (Wednesday).

With his regular driver David Medhurst in the sulky Touchwood Bucksta forged to the front courtesy of a freak rails run heading down the back stretch the last time and left his rivals in his wake in the home straight to go on and score by almost 22 metres over Hamish Holmes and Springvale Flyer.

Touchwood Bucksta held the front but Medhurst opted to hand up and take a trail behind the favourite Little Vance Lot ($6.20).

When Little Vance Lot drifted up the track nearing the top turn in the back straight Medhurst urged his charge through the gap to take the lead and the rest is now history.

The win was witnessed by a crowd estimated to be in excess of 1500 and clearly one of the best ever seen at the Kensington Park Paceway.

Touchwood Bucksta (Topnotcher-Touchwood Lee) had impressive form going into the race with three wins and a luckless sixth immediately before lining up in the New Norfolk Cup.

Listen to what driver David Medhurst had to say about the win – click here.