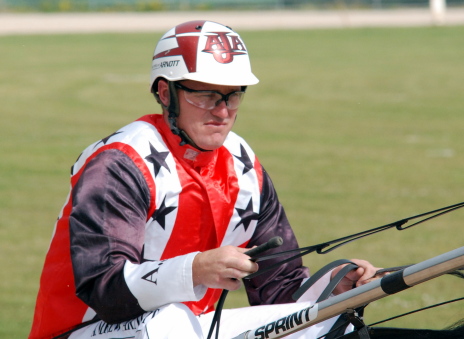 THE owners of two-year-old pacer Miss Touchy were rewarded for their patience when the filly scored a game win in the opening race at The TOTE Racing Centre in Launceston on Sunday night.

The filly was allowed to settle back in the field by driver Andrew Arnott and after making a move 800m out she was four-wide into the straight but made light of the task to score narrowly from Buck major with Artistic Place almost three metres astern.

It was a heady drive by Arnott who ensured the filly wasn’t overtaxed early in the race.

Miss Touchy was close to being sacked by her owners owing to her obnoxious behavior and sub-par attitude to racing but eventually she came around and based on her effort on debut she may have a bright future.

“We had a lot of trouble with her – she’d kick your head off at one stage and we were going to pull the pin,” said part-owner Alf Brooks.

“She’s not called Touchy Miss for nothing.”

The filly is owned by Brooks and Mark Jones who bred the filly from a mare, Star Of Danielle that he bought at a sale in New Zealand.

“Star Of Danielle won a fillies classic (The Liza Storm) at Burnie as a two-year-old but soon after she broke down with a back problem,” Jones said.

“We tried her later on but she kept going sore so we opted to put her to stud,” he said.

She also has a yearling colt by Aces ‘N’ Sevens.