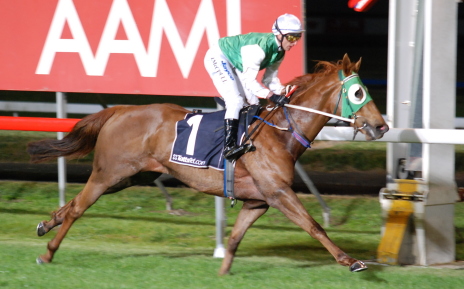 CAN Tasmania’s star galloper Geegees Blackflash deliver on a promise made by his trainer John Luttrell at the end of last season and make it back to back wins in the $90,000 Country Club Tasmania Newmarket Handicap over 1200 metres at The TOTE Racing Centre in Launceston on Wednesday night.

Geegees Blackflash began his 2011-12 preparation with a brilliant win in the Newmarket a year ago and that was to be the first of five feature race wins in succession including the AAMI Hobart Cup (2200m) with his only defeat coming in the AAMI Launceston Cup when edged out by another locally-owned and trained star Prevailing.

While all eyes will be focused on the champ on Wednesday night, he faces a task as he was supposed to trial in Hobart last Tuesday but had to be withdrawn owing to a boil that had developed on his off shoulder as a result of his rug rubbing the area.

“The horse has been in work a long time and while we would have preferred to get the trial into him we are still confident he will be very competitive on Wednesday night,” Luttrell said.

“I believe the horse has come back bigger and stronger than ever and hopefully he can have another great season,” he said.

Geegees Blackflash also has to contend with carrying the top weight of 60 kg, giving away 3.5 kg to last season’s Group 3 Bow Mistress Stakes winner Rebel Bride and between four and six kilograms to the remainder of the field

This year’s Newmarket is packed full of genuine sprinters and has been flavored with the inclusion of one interstate invader in the form of the Doug Harrison-trained It’s Crunch Time that had outstanding form last preparation.

It’s Crunch Time won a good race over 1200 metres at Moonee Valley last season and resumed with an impressive win in a 0-89 handicap at the same venue over 955 metres at the end of October.

At his most recent outing the Fusaichi Pegasus gelding finished midfield and not disgraced in a 1000-metre race at Flemington on Oaks Day.

The state’s reining premier father-son training combination of David and Scott Brunton hold the key to the race with three genuine winning chances in Sorell Miss, Punctuate and Galibier.

Punctuate had not won a race for over 18 months until he presented first-up in Hobart just over two weeks ago for an impressive all-the-way win in the Goodwood Handicap that is now regarded as the prime lead-up race to the Newmarket.

Punctuate ran third in last year’s Newmarket but after the handicapper loaded eight rating points next to his name he quickly got weighted out of most races that he contested.

But as the rating points whittled down he has again become competitive and should he mirror his most recent effort the gelded son of Invincible Spirit will be hard to beat.

Stablemate Sorell Miss is arguably one of the most underrated sprinting mares in the state and her most recent effort when successful in an open handicap on a dead track in Hobart was awesome and her liking for the Launceston track is going to give her an edge in the Newmarket.

Galibier is an untapped commodity having won at his only two starts this preparation and in class four events.

But it has been the way he has gone about winning that has impressed most and should he get a charmed run in transit the lightly raced son of former smart mare Bianchi could have what it takes to win Tasmania’s most prestigious sprint race.

Bionic Star resumed with a game second to Punctuate in the Goodwood but his regular rider Brendon McCoull has opted to partner Galibier so Chris Pace has snapped up the ride on Campbell’s top sprinter.

Rebel Bride has yet to recapture the form that took her to victory in the Group 3 fillies and mares race in Hobart last February but if she brought her A-game she would make her presence felt at the business end of proceedings.