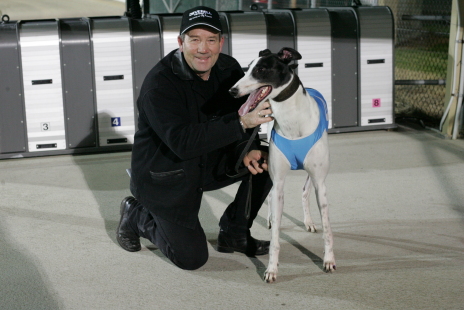 THE Head Bound – It’s A She litter achieved another milestone last night when Jethro broke the 709m track record (41.30) in the second of the two Tasmanian National Distance heats.

This feat meant that he became the third sibling of the litter to break the record with sisters Miss Hetti and Bell Haven achieving the record in April and July respectively.

Now of course it does need to be pointed out that there has been only a handful of runs over the 709m trip since the boxes were installed however it still must be an unusual record for three littermates to have held a track record over the same distance and track all in the space of four months.

Trainer Butch Deverell was tickled pink with his charge.

“This dog is a freak, his constitution and recovery is phenomenal, he was pulling me back to the kennel block after the run” Deverell said.

“This is only his second run over the trip having won the Winter Stakes at Launceston at his first look and two weeks ago he was running in the heats of the Maturity”.

The Industry was abuzz after he trialled over the 580m trip on Saturday morning at Devonport running 33.01, just one hundredth off the track record on a non race prepared track surface while brother Beaudine ran a respectable 33.50 the same morning.

Jethro began with them and was held up a shade on the first corner before bullocking his way to the front by the 461m boxes, from there as they say the rest is history an 8 ¾ length win over the Ted Medhurst trained Tadmore Dunoon.

Deverell was pleased with his draw in the Final (box 2) and believes his charge has what it takes to represent Tasmania proudly in the National Final.

“He is so light on his feet when he runs and he is still so young, he is very exciting but his sister (Bell Haven) has drawn eight and she will take a power of beating”.

Ted Medhurst who trains the brilliant Bell Haven has stated that she is the best stayer he has prepared and after her all the way win by eleven and a half lengths must be feeling very confident for this week’s Final.

She jumped straight on the bunny at box rise and although she went a little wide around the first corner she never looked like being caught.

With brother Beaudine in all sorts of trouble out the back she made the most of it to score in 41.49.