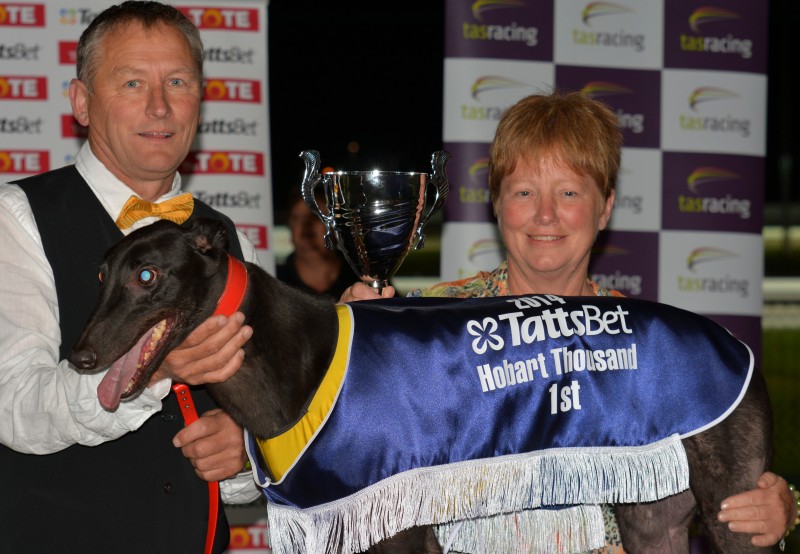 NEW ZEALAND-owned greyhound Above All could be the best dog ever to find its way into top trainer Robbie Britton’s kennels given the ease with which he dispensed with a top class field in the Group 1 $105,000 Tattsbet Hobart Thousand at Tattersall’s Park tonight.

Above All was having only his 11th start in Australia and 13th career outing but he delivered a performance that was more like that of a seasoned star.

The Allison Lee-owned dog began well from box five and had the lead after travelling 50 metres and was never headed.

He powered his way up the home straight to score by almost eight lengths from Ride The Rails with the favourite Dyna Villa a head away third.

Above All smashed Paw Licking’s track record of 25.64 that he set in winning last year’s  edition with Britton’s new kennel star stopping the clock at a scintillating 25.52 which was two lengths quicker than the previous best.

“I was loathe to declare this dog the best I have trained for fear of putting the mockers on him but after what he did tonight I’d have to say he probably is the best I’ve trained,” he said.

“I have trained some good ones but to what he is doing at only his 13th start is quite amazing.”

“What he is doing is quite frightening and if he continues to improve, as I believe he will, then who knows what he might achieve,” he said.

Above All made his way into the final with a brilliant heat win, overcoming a slow start and bad interference twice in the run yet he still managed to power home and win comfortably and in a tick over 26 seconds.

Dyna Villa was game in defeat and Ride The Rails, from the Kelly Bravo kennel,  worked home well from well back to edge out the favourite in the shadows of the post.

Britton said Above All is entered for a heat of the Silver Chief at Sandown on Saturday in which he has drawn box one but there is no guarantee the dog will start.

“I will wait and see how the dog comes through this race before I make any firm decision about Saturday night’s race.”

Hellyeah Bolt was another Tasmanian finalist but he was scratched after suffering an injured toe suffered in work leading up to the race.