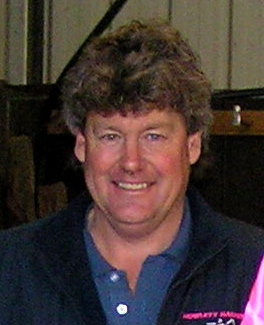 TRAINER Chris Howlett was conservative in his assessment of lightly raced four-year-old Red River Gee Gee after he powered his way to another impressive win in Hobart on Sunday night.

With premier reinsman Gareth Rattray aboard, Red River Gee Gee made it back-to-back wins and scored in a manner that was as equally impressive as when he broke his maiden status two weeks ago.

The gelding defied a tough run facing the breeze to go on and score comfortably from Touchwood Teeksta and BroTown in the Southern Cross TV Pace over 2090 metres.

“He’s won a couple but he’s very small so we are probably better off waiting until after he’s had a spell and see where’s he’s at next preparation before making any bold statements,” Howlett said.

“When he came to the stable he was quite bully and he took a bit of straightening out but eventually he came good.”

“He was his own worst enemy early on because he would get himself beaten in races but he got better each time he went around so that was a real positive.”

“He also brushed his knee a bit when he first arrived but different shoeing has been able to sort out that problem,” he said.

Howlett’s son Justin drove the horse at his first few starts for the stable but when he was suspended the reins were handed to Gareth Rattray who was suitably impressed by the horse.

“I’ve driven him three times and he’s improved each start and this win was quite impressive,” Rattray said.

“Given time I think he has the makings of a good horse,” he said.

Red River Gee Gee is owned and raced by the trainer’s parents-in-law, Paul and Elizabeth Geard in partnership with Paul Geard’s cousin John McArdle, who is the brother of Bob McArdle of Nevelle R Stud fame.

Howlett said Red River Gee Gee would have his next start in Hobart in a race for claiming novice drivers in a fortnight in which his son Justin would take the sit.

“Braden has stated to hobble some of the horses and he should be heading to the trials soon,” he said.

Harness racing is a real family affair for the Howletts who regard it as part of their lifestyle.

Chris’s father Charlie was regarded as one of the best reinsmen Tasmania every produced and Chris too had a big following when he was driving.