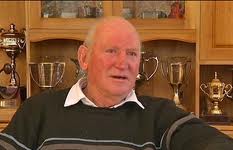 TASMANIA lost one of its greatest sporting heroes this week when Darrel Baldock died as a result of a stroke, aged 72, at the Mersey Community Hospital at Latrobe on the state’s North-West Coast.

Baldock was best remembered as the skipper of VFL/AFL club St Kilda’s only premiership in 1966.

His football achievements were great having played 119 AFL games with the Saints during which time he earned the tag “Mr Magic”courtesy of his brilliant ball-getting skills and Houdini-like escapes from the clutches of opposition players.

His feats on the football field led to him being inducted into the Australian Football League Hall of Fame and more recently he was upgraded to Legend status.

He also delved into politics and like everything else “The Doc” tried his hand at he succeeded, spending 15 years in the political arena before resigning to coach his beloved St Kilda in 1987.

He suffered the first of many strokes in his first season as coach of the Saints but in typical Baldock fashion he shrugged off the illness like water off a duck’s back and carried on regardless.

While football and politics consumed a great part of his life, his great passion outside of those domains was horse racing and that too delivered some magical moments in his life in latter years.

Baldock was special in that he took to training thoroughbreds as if he had been doing it all of his life.

He prepared some top class gallopers at Spreyton including Chardere that won two Devonport Cups and both times with Craig “Froggy” Newitt aboard.

During his time as a trainer-breeder-owner he won four Devonport Cups, a Launceston Cup and Hobart Cup with Andrias in 1982 as well as a VRC Grand National Hurdle.

Globally, Baldock will be best remembered for his football prowess but those who knew him well will remember him as a genuine, no-holds-barred bloke who gave his all at whatever he put his hand and mind to and a generous person anyone would be glad to call a friend.