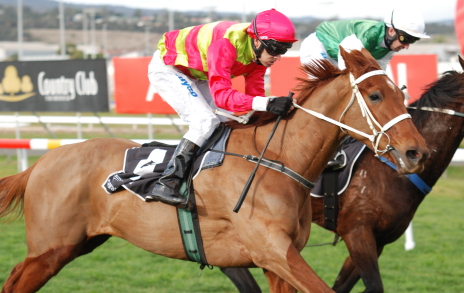 TRAINER Adam Trinder heaved a sigh of relief when his three-year-old gelding Peron Dunes scored a narrow but game win in the Colours Function Room 3YO & Upwards Maiden over 1200 metres in Launceston on Sunday.

Peron Dunes has been a bit of a problem horse for Trinder who at one stage had to send him back to the breakers for some serious re-education.

“The horse started to develop a tendency to buck and that led to him crashing through the running rail here in Launceston so off to the breakers he went to be re-educated and thankfully he returned to the stable a different horse,” he said.

Peron Dunes impressed on debut with an eye-catching third on his home track at Spreyton but it was at his subsequent outing in December last year that he put on a rodeo act and crashed through the running rail soon after leaving the barriers.

But he resumed racing with a game second in Launceston on May 12 and proved that form good by scoring last Sunday.

The gelding has been partnered by Kelvin Sanderson at his only two outings this time in.

Listen to what trainer Adam Trinder had to say about Peron Dunes’ maiden win – click here .