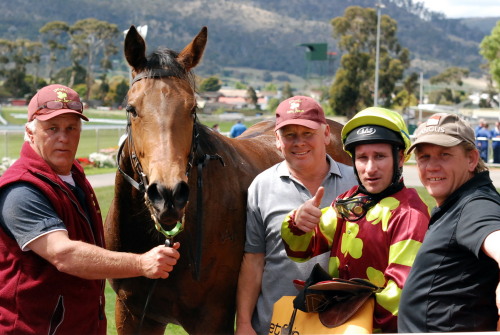 WESLEY VALE trainer John Keys can thank his brother Ken Keys for being put in a position to buy Tasmania’s first two-year-old winner of the season Triple Asset.

The filly produced a powerful finish along the rails in the home straight to score comfortably from More Awesome and Oxy Angel in the 2YO Handicap over 900 metres at Tattersall’s Park in Hobart.

Triple Asset is a graduate of the Tasmanian Magic Millions Yearling Sale but she was passed in for $28,000.

She was bred by Armidale Stud and upon her return from the sale ring Armidale proprietor Robyn Wishaw was approached by John Keys with the intent of negotiating a purchase.

Wishaw thought she was talking to Ken Keys so she offered the filly at the passed-in figure, which was $2000 below the reserve.

Keys then sold shares in the filly to friends Mat Carter and Howards Smith.

Triple Asset is by Nadeem out of the Hennessy mare Caralowe.

“She was always going to be an early two-year-old because she showed a liking to run from day one,” Keys said.

The runner-up More Awesome (More Than Ready-Breezer) did a lot of work to be in a winning position turning for home and kept trying in the straight.

His trainer Dean Wells was pleased with the effort and said there was a lot of improvement in the gelding.

Oxy Angel (West Quest-Bistino) was the medium of a big plunge and while trainer Terry Evans was adamant it was not his money, the filly is raced by a syndicate known as The Horse Racing Tragics, so members of that group may have given the TOTE a nudge.

Listen to what trainer John Keys had to say about Triple Asset’s win – click here .