Truly Blissfull back on track 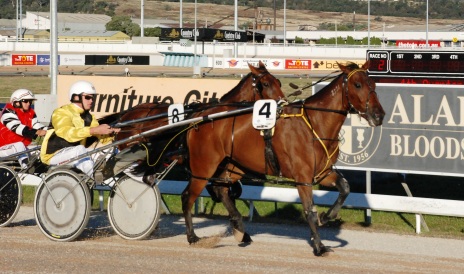 TRULY BLISSFULL made a welcome return to the winner’s circle in Launceston on Sunday night to suggest he may be worth heading towards some of the feature races later in the year.

Trainer Geoff Smith had high expectation of the son of Blissfull Hall-Really and Truly after he won his first two starts last season but other than a win at Devonport on January 2 against modest opposition he has failed to recapture that form this time in.

On Sunday night he was driven superbly by talented young reinsman James Johnson who had him perfectly placed in the coveted one-out-one-back position from a wide draw.

When Johnson called on the entire to make his move nearing the home turn he loomed quickly to challenge and went on to score by seven metres from Domani Gem with outsider Risenshine a similar margin away third.

Smith said the four-year-old may yet realise his full potential.

“By the end of his three-year-old season I couldn’t get him going at all,” Smith said.

.”He probably just d needed a break. I gave him a good spell, brought him back into work, and then gave him another three weeks off.”

“I have no doubts he is capable of breaking two minutes in a mile raced in Hobart in a fortnight, which will be his next start,” Smith said.

The horse was bred by prominent breeder Noel and Marlene Salter and knocked down to Smith at the 2007 yearling sale for $10,500 and subsequently raced by Smith in partnership with Neil Armstrong, Mark Kable, Dean Hart and Leo Koomen.

Smith said the owners of Truly Blissfull are keen to become involved in another horse.

“The owners are keen to get into another one (horse) so they are looting at a Blissfull Hall two-year-old I’ve got in work that I bought for $13,000,” he said.