Trysty to be aimed at Devonport Cup 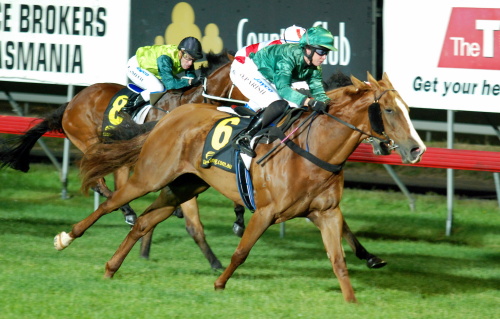 CONSISTENT sprinter Trysty will be aimed at the $100,000 Devonport Cup over 1800 metres in January despite all of the gelding’s good form being over much shorter distances.

Trysty won two races under lights in Launceston in May-June over 1200m and at the same venue last night (Nov 25) he delivered the goods again over the 1200-metre trip.

That followed a luckless run in the Newmarket Handicap over the same distance last week.

.But the five-year-old’s trainer Barry Campbell is adamant the son of Royal Tryst will be just as good over the Devonport Cup trip of 1800m.

“I’ve thought for some time that this horse will be good over more ground so we are going to aim him at the Devonport Cup,” Campbell said.

“If it doesn’t pan out as we plan then we have some other options but I am very confident he will run at least a very strong mile (1600m),’ he said.

Trysty was one of the state’s better performed two-year-olds winning at his first three starts ands placed in two subsequent feature races.

But he missed most of his three-year-old season due to the discovery of bone chips in both knees after he contested the 3YO Cup.

The gelding has been ridden by underrated jockey Dianne Parish during his past two campaigns.

At his latest outing Parish had Trysty settled third on the fence behind the leader and when they reached the home turn she eased him off the paint and the gelding did the rest, scoring by almost a length from the heavily backed gently Bentley with race leader Two Bob over a length astern and just in advance of Lock It In Eddie.