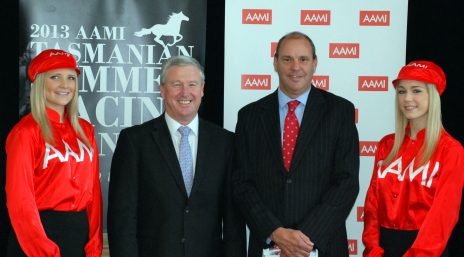 The TSRC is now firmly established as one of the best events of its type in Australia with trainers and owners from many states targeting Tasmanian feature races with some of their top performers.

The interstate invasion began early this season with Victorian sprinter Its Crunch Time making the trip across Bass Strait and emerged triumphant in the Newmarket Handicap.

There should be even more interest in the AAMI Hobart and Launceston Cups with a $100,000 bonus on offer for any horse that can win both cups.

The trainer and owner of the winning horse each receive $50,000 with the bonus proudly sponsored by Tattsbet.

Last season, Geegees Blackflash went within a head of winning both major cups and will no doubt again be a major player throughout the carnival.

Geegees Blackflash’s owner Paul and Elizabeth Geard were on hand to talk about their horse’s chances of taking the major cups double and the Tattsbet-sponsored windfall.

“We are confident Blackflash is back even stronger than he was last season and I think he proved that by the way he won the Conquering weight-for-age race in Launceston last Wednesday night,” Paul Geard said.

“He is going to be hard to beat in the Kevin Sharkie (1600m) in Hobart on Sunday and by the time he gets to the Hobart Cup he will be at his top,” he said.

For the full story go to from the CEO desk – click here .