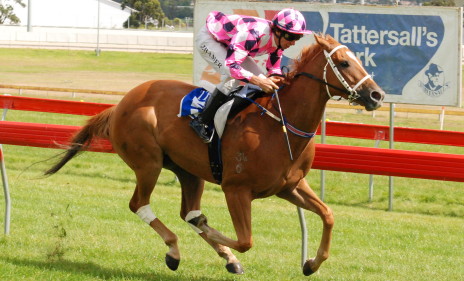 TURF PREDATOR made up for a bunch of minor lacings when he finally broke his maiden status at Tattersall’s Park in Hobart on Sunday.

With Just Hamer aboard, Turf Predator ($5 into $2.80) led and after being pressured by Farasi from the 700m to the home turn he kicked clear and went on to defeat that horse by three lengths with the favourite Megaraptor ($1.80 out to $2.30) a half-length astern and just in advance of Faithful Gee Gee.

Turf Predator is trainer at Brighton by Gary White who was thrilled with the win.

It was the gelding’s first win in 11 starts but he had shown ability with four minor placings.

Listen to what trainer Gary White had to say about Turf Predator’s win – click here .