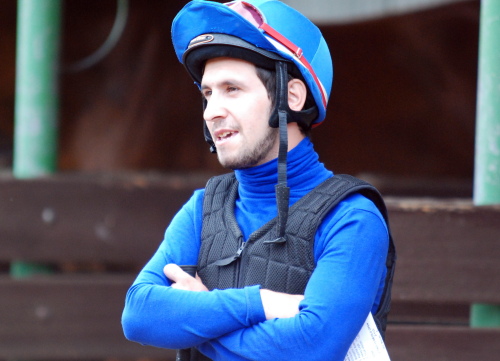 TASMANIA’S jockey shortage was eased slightly this week with the arrival of Turkish apprentice Rasit Yetimova who has been indentured to Hall of Fame trainer Walter McShane.

While with Hayes he rode many of his Group 1 winning stable tenants to victory in trials including Miss Finland and All American.

Hayes was unable to take him on as an apprentice because the trainer had filled his quota of overseas employees.

That’s when Yetimova opted to make the journey back to Turkey and spend 18 months waiting for a permanent visa to work and live in Australia.

“It’s been a long, drawn out process but we finally have Rasit in Tasmania, McShane said.

“Rasit had to go back to Turkey after his four-year-stint with Hayes just to become eligible to gain a visa that gave him permanent residency status and eligibility to continue his riding career here in Australia,” he said.

Rasit was aware of the shortage of jockeys and apprentices in Tasmania which is one of the main reasons he was keen to start a new chapter in his life with the McShane stable.

“I spoke to Mr Hayes about my future as an apprentice rider and he told me to head to Tasmania where he believed I would do well but that involved going back to Turkey for 18 months,” Yetimova said.

“It was a long wait but I have settled in really well at Mr McShane’s and I am looking forward to riding at my first meeting on Sunday,” he said.

He wasted no time in showing off his talent by winning both trials in whixh he had rides at Elwick on Tuesday.

Yetimova partnered the Brendon McShane-trained Secdolru to victgory in his 900-metre trial and he also guided the Rhonda Hall-trained Dalkeith Dancer to a convincing trial win.

Yetimova has been booked to ride Breath Testa in the class four (race 8) for Tammy Mollross.

Yetimova arrived in Australia eight years ago as part of the Traintech 2000 program on the Gold Coast.

Traintech 2000 offers a wide range of vocational and recreational horse management courses which were developed to open pathways for those wishing to learn how to work with and to enjoy horses.

Top Victorian-based Turkish rider Ibrahim Gundogdo also is a graduate from the Traintech 2000 program and he, along with Rasit, were two of eight Turkish teenagers who participated in the 14-month course from 2002-2003.

During that time he worked for trainer Bob Mahon at Beaudesert for four months before spending six months with Gold Coast trainer Kelly Doughty.

Yetimova returned to Turkey after finishing the Traintech course in 2003.

“When I returned to Turkey I got my Turkish jockey’s licence but I only had three rides in the first year because I was based in Istanbul which is the best of eight racing centres in Turkey and it is where most of the country’s best riders are based,” he said.

Riding trackwork and in trials for the Hayes stable was great experience for Yetimova and it is that experience and his natural ability that are likely to propel him into Tasmania’s racing spotlight once he gets his first winner.

Yetimova is a natural lightweight who walks around at 47 kilograms and he is able to claim four kilograms in races, which is bound to encourage trainers to utilise his services.